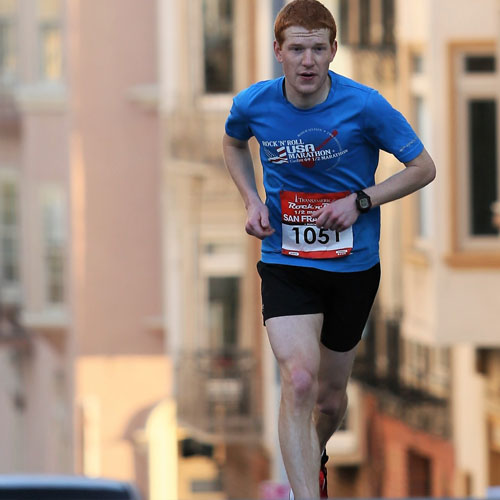 If you are planning to run your first marathon ever, we are sure that you will be curious to know the average time to run a half marathon. For the average marathon runner, a good time is 1 hour: 50 minutes and 54 seconds.

This time is the average posted time for both males and females, but the fastest professional runners complete a half marathon in half a little under an hour to post 58:01.

However, these times vary from one runner to another. The personal best of one runner may be the worst records posted by another, so your half marathon completion timer should be a personal best of yours that will serve as a benchmark for you to improve your performance.

Running in a marathon for the first time is one of the hardest physical engagements you will ever get involved in. While you may not be able to complete the race in record time, if you are able to set and meet a time for a half marathon distance of 13.1 miles, you will then be motivated to improve even more.

Tracking your time will help you evaluate your performance and where you rank in relation to other runners.

What Is The Distance Of A Half Marathon?

A half marathon is basically 13.1 miles, and different runners cover the distance at different finishing times depending on their speed which is influenced by their age and fitness levels.

For male runners, a completion time of 01.44.14 is a very good time since it represents the average time posted by all male runners regardless of their ages. However, the record for fastest time by male runners is 58.01.

How Are Runners Ranked Based On Ability?

Runners are ranked based on their ability which is mostly influenced by their experience levels. This is how they are ranked:

A beginner in a marathon race is someone who has only started running long distances recently and has been at it for at least 30 days. Beginners are faster than 5% of average runners.

A novice is a runner who has been running long distances for at least 180 days or 6 months. Novices are faster than 20% of average runners.

As for elites, they have dedicated the last fives years of their lives to becoming competitive runners. Elite runners are faster than 95% of average runners. They can cover much longer distances, and they possess extended endurance.

How Long Will It Take Me To Train For A Half Marathon?

By applying yourself consistently for at least three months while also eating a healthy, balanced diet and sleeping well, your body will be prepared for the rigors of a half marathon.

Average Time To Run A Half Marathon By Nationality

There are different times posted by runners from different nationalities. In the UK, for instance, the average time is 2:02:43. Also, runners of all genders do well over half marathons compared to full marathons and other long-distance races.

For male runners in the UK, the finish time is 1:55:26, while females post a finish time of 2:11.57. Male runners cover a kilometer in 5.57 minutes, while for women covering the same distance, they post an average timer of 6:40 minutes.

For runners in other countries, Russian runners top the charts, having posted the fastest time of 01:45:11 seconds, with Belgium coming in second with a time of 01:50:20 seconds. In Europe, the half marathon is preferred over all other long distances, which best explains why many runners turn up for half marathon events

For women, the record is held by Ababel Yeshaneh of Ethiopia. Born on the 22nd of July 1991, she broke the record on the 21st of February 2020 by clocking a timer of 1:0431 at the Ras Al Khaimah Half marathon. These records by both Africans still stand to date.

What Can Be Considered A Good Half Marathon Time?

If you are a beginner and wish to compete in a half marathon, a very good time to finish the race is anytime between 2:20 minutes to 3 hours. If you are an intermediate runner, your goal should be to complete the distance in 2 hours which will represent a time of 9:09 minutes per mile.

How To Prepare For A Half Marathon?

If you want to post a good average time, you need to start preparing for the race as early as possible. Here are some things you will have to do.

There very first thing to do is to evaluate your potential. Know your limits and how fast you can go. A full marathon is 26.2 miles, so before you subject yourself to such a punishing activity, you need to be sure that your body is in good physical condition; otherwise, you will be exposing your body to potential injuries.

You should either consult your doctor to give you his/her professional advice or start training early ahead of time. If you are under any form of medication and you are dealing with a health challenge, it will be in your best interest not to participate in a marathon.

If you are in good health and want to train for a marathon, it pays to start training as early as possible. Doing so will help your system get used to running long distances. If you can afford to, start training at least a year before the race. An extended training program will be good for your body.

With enough time on your hands, you will avoid building weekly mileage that will weaken your system and cause injuries. You may choose to run between 20-30 miles a week and give yourself enough rest time in between races.

You can start by covering shorter distances like 5k and 10k, and then as your body gets in sync, you can progress to a half marathon. Within a few months, you can then complete a full marathon. Subjecting your body to regular training is a great way to prepare for your first marathon mentally and physically.

Whether you plan to run a half marathon or a full marathon, it pays to pick the right one for you. Marathons may all cover the same distances, but the terrain and conditions are not the same.

Some marathons are low-key races across dense forests and city outskirts. Others pass through densely populated cities with excited fans and spectators linings the route and cheering friends and their favorite stars. So if you want to pick the right one, do your research and pick one that will suit your condition.

Some experts advise beginners to choose marathons in their city or country. This will offer you a sort of home advantage since you will be less nervous, you will be familiar with the terrain, and you may even have some family and friends present to cheer you up. If it happens to be a road or route you have been training on, that gives you a little more advantage over other runners.

Here are some excellent training tips to help you improve your strength and stamina.

Try to build your mileage from one week to the next. Avoid the temptation to increase your mileage too quickly, so you don’t sustain injuries. Rather start small and increase it a few times every week.

Work on your speed by executing speed work every week to boost your cardiovascular health.

At least once a week, cover longer distances to improve your endurance and stamina.

Don’t forget to rest your body, so you don’t suffer from burnout or sustain injuries.

If you plan to run a half marathon anytime soon, make sure you start training ahead of time to prepare your body physically and mentally.