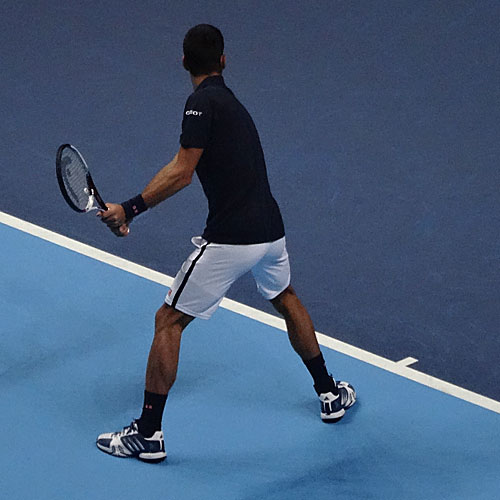 For those who don’t know what the Eastern backhand grip is, it is a grip used by tennis players for holding their racquets when taking shots during a tennis match.

There are three types of grips in general as far as tennis is concerned. We have: continent grip, eastern grip and semi-Western grip.

In most cases, the average tennis player changes their grip during the course of a tennis match and very rarely do you see one using the same grip from the start to the end of a match.

And of all three, the Eastern grip is one of the most commonly used grips.

Origin Of The Backhand Grip

To better understand how the Eastern backhand grip works, we first need to know the origin of backhand grips in general.

Backhand strikes can be executed with both hands or one hand. And for years now, the top 100 WTA players played with one-handed grips.

For the ATP top 100 male players, about 24 of them also preferred to play with one-handed grips ad of 2014, which is a drop compared to a decade earlier. It despite the drop, the backhand grip still remains popular.

Also, when you look at the last 100 years, backhand strikes were mostly performed by many players with one hand regardless of whether it is the Eastern or Continental grip. However, there are a few players today who play with the Semi-Western grip using one hand.

The Semi-Western is not as popular as the other two, but it is similar to the Eastern grip. It has more topspin compared to a one-handed Eastern grip. Also, Semi-Western grips make it easier for a one handed player to hit shots at shoulder height but will find it more difficult to hit low shots.

This probably best explains why the Semi-Western grip is not as popular as the other two. However, we should also note that the other two have their own limitation as well.

One-handed Eastern grips have different variations that were popularized by legendary players like Gustavo Kuerten, Richard Gasquet, and Justin Henin.

Then as for the two-handed backhand grip, it is widely used by players who hold the racquet in their forehand using the Continental grip.

Don Bulge is regarded by tennis historians to have had the best backhand of all times. Don had a very powerful one-handed backhand stroke during the 30s and 40s that traveled with a very strong topspin.

Another famous player with a strong backhand was Ken Rosewall. He had an accurate backhand underspin all through the 50s and 60s, and tennis experts believe that one-handed backhand slices are effective for delivering comfortable shots.

There are different variations/types of backhand grips. Let us review all three with the Eastern grip included.

This grip is executed by placing your hand, and the base of the knuckle with your index finger and heel is on the right of the bevel. An Eastern grip allows you to gain significant control and spin with your strikes. Also, the opposite side of your racquet is used instead of the main side used in the case of an Eastern forehand.

For those who prefer to use your Western forehand, the same racquet side is used similar to the Eastern backhand to hit balls, so a change is unnecessary.

The Semi Western backhand grip is not the same as an Eastern backhand grip. This grip is executed by placing your hand on the racquet base knuckle in such a way that your index finger is on the right side of the bevel. Unlike the continental grip, the racquet is rotated clockwise by 90 degrees.

The Semi-Western is not as popular as the Eastern backhand, but it can still generate enough pace and topspin.

Another type of backhand grip is the two-handed grip that is executed by holding the racquet with two hands, similar to the way you perform a continental grip.

But you place your left hand above in Semi-Western forehand fashion. Two handed backhand grips are very common among pro tennis players, but there are slight variations of the player is left or right-handed.

How To Play Using An Eastern Backhand Grip

To strike a tennis ball using an Eastern grip, you will have to position yourself with your shoulder apart, and your knees slightly bent in a ready position.

This posture creates room for you to move in any position quickly in anticipation of an incoming ball. As the ball is coming, you turn your hips, legs and shoulders to your left regardless of your dominant hand.

While in motion, you are expected to turn your racket clockwise to hold it in an Eastern backhand position and the sooner you do this before the ball reaches you, the better. Good footwork is also very important for efficient movement and more ground coverage.

When Do I Use An Eastern Backhand Grip?

This grip is commonly used by players who prefer to play with one hand when making topspin groundstrokes. It is effective for executing aggressive strikes and flatter shots or shooting neutral balls or defensive lobs.

Its versatility makes it a very popular choice for many, but it is not the best for slice strikes as the continental grip is better for slices.

Pros And Cons Of The Eastern Backhand Grip

Every grip has its strengths and weaknesses, and so does the Eastern backhand grip. In a nutshell, here they are:

Benefits Of The Eastern Backhand Grip

If you are a beginner, you will have no qualms learning how to hold your racquet in this fashion. It also helps you learn how to perform forehead strokes easily.

The Eastern backhand is very versatile. This allows you to switch from one type of grip to another and back during the course of a match set. Just like the continental grip, you can transition from forehand strikes to volleys and vice versa.

If you are an aggressive player who likes to attack the net, you will enjoy playing with the Eastern grip. You can attack your opponent aggressively while also defending balls struck at you. It also lets you put your opponent in a defensive position by executing low clearance and bounce.

During competitive matches, flattening the balls ensures that you reduce the occasion for serving errors.

Disadvantage Of The Eastern Grip

One of the major drawbacks of the Eastern backhand grip and why some players prefer not to use of often or at all is because it is hard to generate a topspin when you hold your racquet in this position. If you prefer hitting balls aggressively all the time, you will not enjoy this grip very much.

While you can still hit strong balls, Western and Semi-Western grips generate more topspin than the Eastern backhand grip.

This grip causes flattened balls, which can be a disadvantage for players who are trying to stay in points. Ball flattening leads to short rallies, which will not always be in your best interest.

How Do You Know If The Eastern Backhand Grip Is The Best For You?

This question does not have a straightforward answer. But here are some guidelines to help you make the decision.

If you are a beginner, you may need to start your training using the Eastern backhand grip to help you gain a feel of the court and the game in general. Once you’ve mastered it and have gained a little experience, you can then progress to other grips.

For those who already have some level of experience, your playing style is another thing to consider. If you like to start sets at the baseline first before coming to the net, then the Eastern grip will serve you well.

If you are already a pro player with a preferred grip, but you desire to alternate your game, you can adopt the Eastern grip to inject more aggression and pace into your game. This will make you an unpredictable adversary on the court.

The Eastern backhand grip is one popular grip that can help you raise your game by injecting more speed and power into your game.

Even if you are a pro with a preferred backhand grip, you can add the Eastern grip to your repertoire of skills to vary your game for better outcomes.